The gas stoves They offer high performance when heating our house or a room without affecting our pocket, which allows great economic savings.

For, help you choose the best gas stoveBelow you will find an updated comparison with the best models that you can buy today. We also offer you a large amount of information in which we explain how these stoves work, where to place them, their advantages, disadvantages ...

To start, here is a comparison with the best gas stoves that you can buy today: 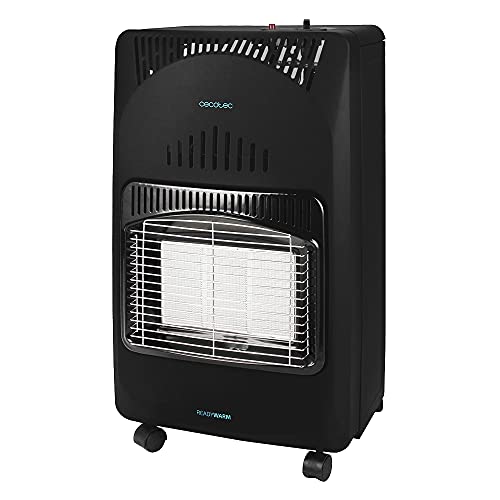 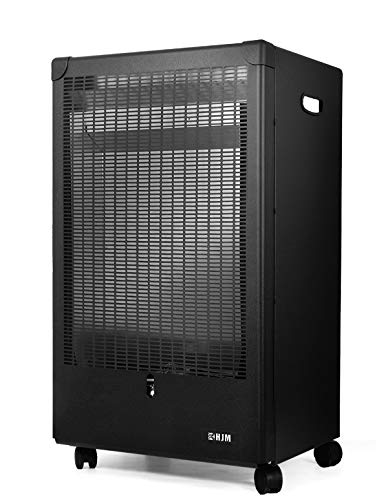 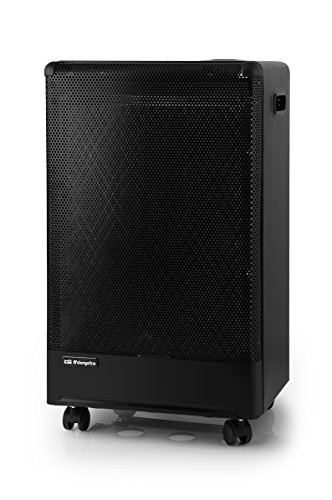 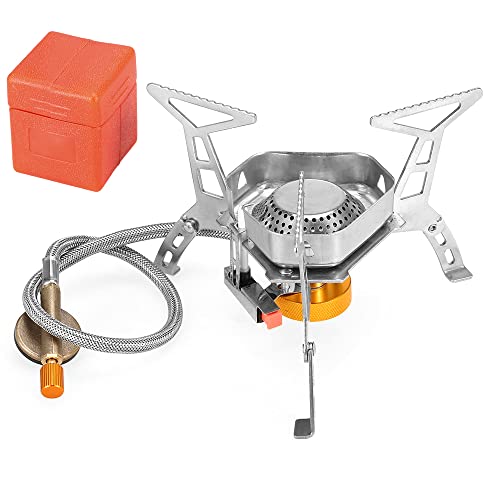 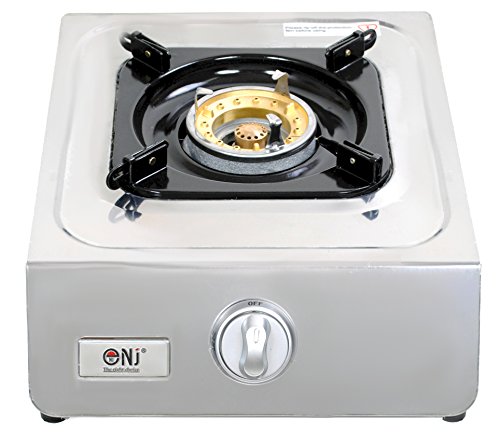 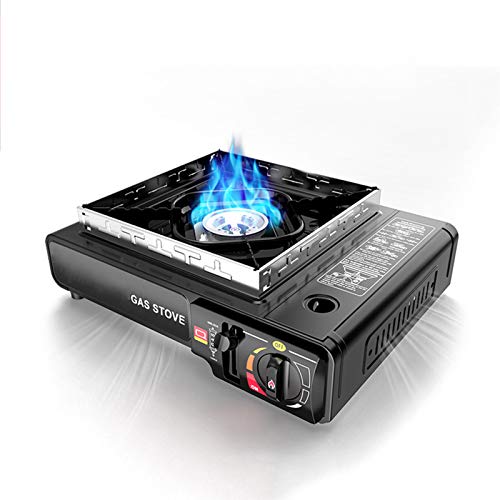 DeLonghi is one of the best-known stove manufacturers worldwide and that it can boast of having in its catalog some of the most popular models, such as this one DeLonghi VBF or VBF2 which are considered to be two of the best blue flame gas stoves. 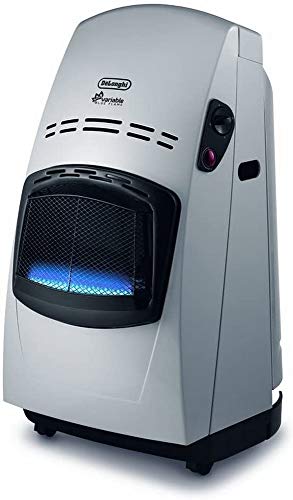 The price of both models is very low, although in the case of the VBF it has a great disadvantage, and that is that it does not have a thermostat, so we will not be able to control the size of the flame. This will mean that we cannot save on consumption, although if this is what we are looking for, we can opt for the VBF2 model that does incorporate a thermostat.

The price difference between both models is minimal, so we directly recommend that you buy the VBF2 model since it is newer and more complete.

Another of the most powerful blue flame stoves on the market is the Prometheus that imitates a cylindrical stove. Like the other stove that we have talked about, it has 3 power positions to be able to adapt it at all times to our needs at all times. Of course, it has a little less power, 11000 W, which will be enough to heat any room, even the largest ones or in outdoor spaces.

Its current price in the market is very competitive since in addition to being powerful and with that flame effect, it has other interesting options such as a triple security system or transport handles to move it easily thanks to its rotating wheels. Accepts propane and butane gas.

One of the best catalytic stoves that we can find on the market is the Olimpia Splendid, a stove that has a catalytic panel offers us a maximum power of 4.200W. Of course, and how could it be otherwise, we can regulate this power thanks to the three selection levels it incorporates: 1200, 2800 and 4200. 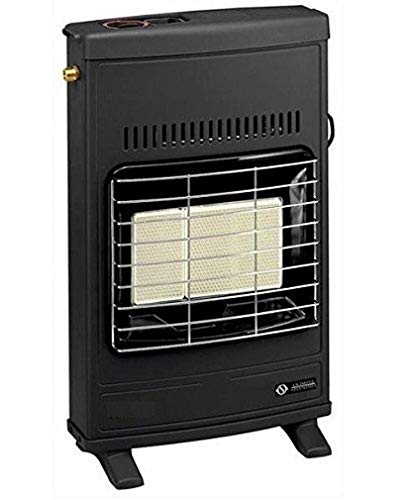 It is also a stove made in Italy, with very low consumption, ideal for heating small rooms, and it has a minimum gas consumption of 118 grams/hour, while the maximum is only 305 grams/hour.

If we are looking for a little more power, the Orbegozo HBF 90 offers us up to 4200 W and a maximum consumption of 305 grams / hour, which is not too high considering that we are facing a butane stove and the price of this gas. 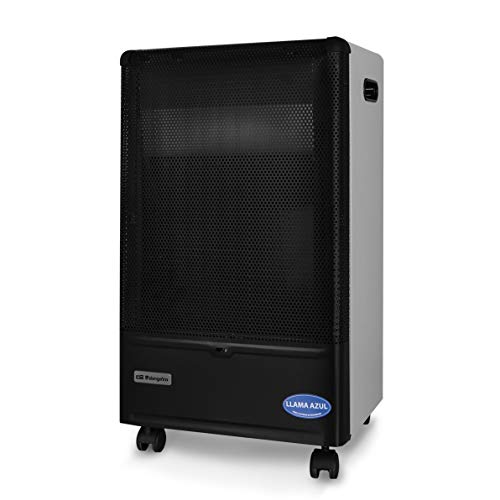 The normal price of this stove is 101 euros, although very normally we can find it with a reduced price that is usually around 80 or 90 euros.

With a compact design, this Butsir EBBC0016 stove offers us the possibility of heating any room with butane gas. Its price also it is the most economical of this comparison and is that we can acquire it for very little money. 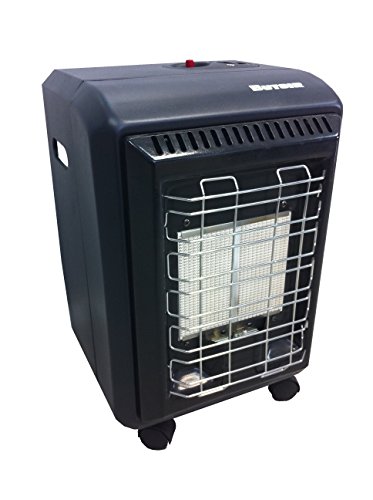 
Among its main characteristics we highlight its two power levels, being able to use a single burner with a consumption of 98g / h or increase the power with a second burner that in total will offer a consumption of 200g / h.

The blue flame gas stoves, they heat the room by convention or what is the same, generated hot air that moves the cold air to raise the temperature of all the air. These types of stoves are not very advisable for small rooms, less than 15 square meters, becoming tremendously effective even in rooms of 40 square meters.

Until not long ago, these types of gas stoves were not economical at all since they consumed a huge amount of gas. Today's Blue Flame Gas Stoves they take much better use of gas, being much more effective and above all economic. To give you an idea, consumption is not usually above 4 liters per gas per hour, which will allow us to reach up to 4000W of heating energy.

Catalytic stoves are recommended by a large number of experts for households with small children or animals, given the enormous security they offer. And it is that one of the main advantages they offer us is that it emits heat through its catalytic panel which makes it not work with direct fire, avoiding a large number of dangers for the youngest people in the house and for all those curious animals that tend to approach the stoves.

Its power is between 2.500 and 3.100 W, with an estimated consumption of between 140 and 200 grams per hour. This makes its consumption lower than that of blue flame gas stoves. They also hold up to the temperature much better once we turn off the stove.

Finally, their great disadvantage is that they do not heat as quickly as other types of stoves, but without a doubt the advantages they offer us make this disadvantage remain in the background.

Gas stoves are widely used in homes to provide heat on the coldest days. They have always been thought to be more dangerous from potential fires and gas leaks. However, over the years, they have enhanced its safety and efficiency.

When it comes to choosing what type of gas stove you want to put in your home, you wonder which one is the best. It is important that you take into account the room where you are going to place it. It must have good ventilation, since the stove consumes oxygen from the environment.

Radiant gas stoves work as follows. They have a high-performance infrared burner that makes them have a higher power. They are capable of reaching up to 4.000 W, so they can heat larger rooms between 25 and 35 square meters. Since they are more powerful, they need to be placed in a well-ventilated room. They usually consume about 300 grams of gas per hour. Taking into account that a butane gas cylinder has 12,5 kg and is the cheapest there is, it is not expensive at all. It is advised to keep it away from children.

Radiant gas stoves are often confused with others such as catalytic and blue flame. However, its operation is not the same. Catalytic stoves use a catalytic panel that does not use fire directly. These stoves are more recommended if you have children at home.

On the other hand, blue flame works by convection. The gas burns at a higher temperature, which has a lower fuel consumption and higher heat emission. They have a longer useful life than other gas stoves

With this information, you are sure not to get more confused between the types of stoves.

Where to put a gas stove

One of the most common questions asked by everyone who buys a gas stove has to do with its location. And it is that most of us have classified everything related to gas as dangerous, when if we have certain precautions, it is far from being dangerous.

To place a gas stove you must follow the following indications;

Although you must take precautions when placing a gas stove, you should not worry too much since most have an automatic shutdown system when the environment reaches a certain CO2 load. This avoids major problems and always keeps us out of any danger.

How to light a gas stove

Many people have the doubt of how to light the gas stove correctly to avoid dangers. The first thing to do is open the gas cylinder pressure regulator valve. The regulating knob must be pressed for about 20 seconds and rotated to its maximum position. While we keep the control pressed, we press the piezoelectric pushbutton several times to make the pilot flame light. When the flame is on, it is better to hold down the knob for a few more seconds and then release it little by little.

If after lighting the pilot flame and releasing the regulator knob it goes out, it's because the bottle is running out. If, on the other hand, the flame does not ignite, the piezoelectric button may be broken or it has collected dust.

It is important not to move the gas stove once it is turned on, if you have to move it, it is better to turn it off and wait a few minutes for the gas in the bottle to stabilize. This is done to avoid possible gas explosions.

Like all of these heating appliances, gas stoves have their risks. They can be dangerous if not used properly and with caution. To avoid dangerous situations we must:

To increase your safety, over the years, gas stoves have improved their performance with a safety system that works like this:

If the security systems do not work, the stove will not work either. Therefore, they are quite safe.

Advantages of a gas stove

Among the main advantages of gas stoves we can find;

The main disadvantages of gas stoves are as follows;

Currently the price of the butane cylinder is 14.15 euros, one of the lowest prices in memory, but which has been increasing since July 2016 without seeming to have a brake.

Below you can see in this graph the evolution that the butane cylinder has had in recent months;

Is a gas or kerosene stove better?

The kerosene stoves are used for situations in which very fast calorific inputs as in large rooms and corridors. Areas such as public buildings, where air currents continually enter through doors opening and closing. This makes that every time the air is renewed, it enters cold again.

For these types of situations, a kerosene stove is ideal, since provides heat in a short time. It is also good for places like basements, workshops, mezzanines and basements for domestic use.

Its main advantage is that it has no risk of explosion or fire. In addition, they are portable, do not require installation or maintenance, are inexpensive and silent. Kerosene or paraffin is a fuel obtained from petroleum distillate and quite cheap. However, they give off an odor that can be toxic when switched on and off. They also load the environment too much, so in a short time it will require ventilation and the cold will enter again.

Unlike this type of stoves, gas stoves they don't load the environment so much and they are more stable over time. So, in conclusion, if you need more heat in places where there is continuous ventilation through open and closed doors, the best option is kerosene. On the contrary, if you need heat in a stable and closed place, better the gas ones.

With this information you will have clearer everything about gas stoves and their operation.


What budget do you have to warm up in winter?

We show you the best options for you


* Move the slider to change the price

Other cheap products that may interest you: